This morning I felt like a zombie. Forced myself out of bed, gulped back two bottles of water from constant dehydration and regretted all I'd done the night before.

The tryout hangover. I know it well.

Push-ups, crunches, laps, scrimmages, sprints -- It's been a crazy couple weeks. Even though my body is feeling the aches and pains, I can proudly say I tried out for FOUR different sports teams this semester at UTSC. Am I crazy? Um. Yes.

I'm only taking three courses this semester, so I do have a bit more time to dedicate to athletics.

The teams I tried out for were girls soccer, hockey, flag football, and boys hockey (yeah, I'm surprised too).

I've been on the girls soccer team for the past three years, so I felt extremely comfortable being at tryouts and already knowing the coaches and past teammates. I was surprised to learn there will not be a girls B team this semester (usually there's an A and B team), and I can tell it bothered a few players. One girl even started a petition to get the B team back, but unfortunately, it didn't go through. I was also surprised at the amount of players who showed up. At least 50 girls pulled up their socks, tied their cleats, and competed for a spot on the team. I've never seen so many players at a tryout, it was awesome!

Tryouts are now over and the team has been made. I made the team (yay) and we already won our first game! :)

What's a fourth down? Don't ask me, I have no idea. So, why did I tryout for flag football? I wanted to try something new this year, and I thought this sport would be perfect. I learned quickly that you can be an amazing athlete, but in football, if you don't know strategy or football logic, you won't go far. At tryouts I was pretty good at throwing and catching the ball, but it was the plays and cuts that threw me off.

Coach: Jess, you're going to run a hook.
Jess: A what?
Coach: A hook.
Jess: What's that? Do I run far?
Coach: You run and cut at a 45 degree angle.
Jess: Cut where? At what angle?
Coach: You basically run straight and turn right.

For the sake of my dignity, I didn't attend the last tryout. It wasn't a sport I could see myself enjoying, but you can't blame me for trying!

Hockey is my safe place. I feel at home on the ice. Being on the team for the past two years, tryouts didn't even feel like work, it actually relaxed me. I have so much fun on the team and all the girls and coaches are great! The only frustrating part is we don't have a goalie...

If you, or someone you know, is a hockey goalie and is a girl who attends UTSC - WE NEED YOU!

Boys hockey tryouts is a WHOLE different story. I have a lot to say when it comes to being a girl playing with guys on the ice. I did make the team, but I will save this discussion for my next post. 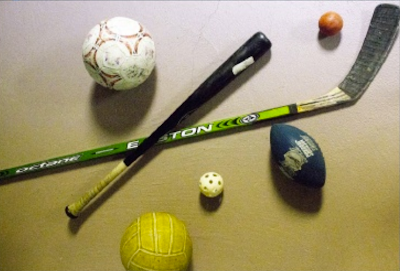 Until then, if you have any questions about any intramural sports, comment below or tweet me @Jessica_Moy and I'll try my best to answer! :)
At UTSC, we are spoiled when it comes to athletics. Intramural sports are FREE to join, not to mention jerseys, water bottles, practice time, transportation are FREE as well. So don't be shy, it's never too early or too late to get involved!

See you guys next week,

Pulse
UTSC Pulse brings you news of campus life at UTSC. Get involved and stay tuned!